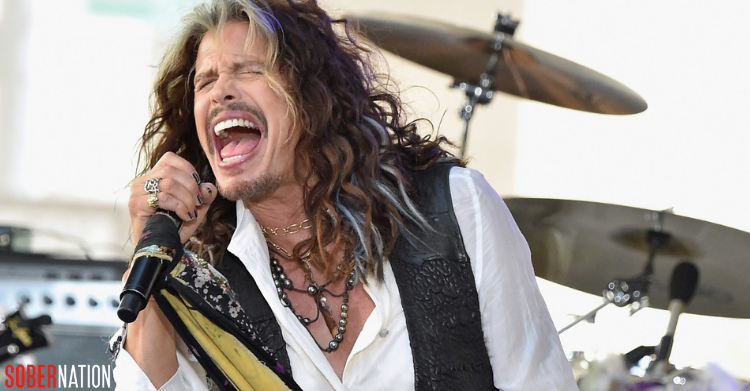 Steven Tyler is a living legend. He is known as one of the best rock vocalists of all time, and his band Aerosmith has sold over 150 million albums and is in the Rock and Roll Hall of Fame. Despite the success and accolades, Tyler has experienced personal and professional ruin because of drug and alcohol addiction. Currently, Steven Tyler has 9 years sober—but the journey to redemption has been anything from easy.

Like many young people growing up in the 1960’s, Tyler started out smoking marijuana. He detailed this in an interviewwith GQ earlier this year:

“I was a beautiful little boy that lived in the woods of New England, New Hampshire…So I grew up in the woods listening to the wind. It was just the silence and Mother Nature, no one around — it was an awfullot of magic there. When I started smoking weed, in ’65, ’66, it kind of enhanced those magic feelings.”

When Aerosmith was formed in 1970, Tyler stated that using drugs and alcohol become a big part of his life. As the band achieved superstar status in the mid-1970’s, Tyler and his bandmates abused a wide variety of drugs including alcohol, cocaine, heroin and LSD. While their substance abuse didn’t hamper their success or creativity during their initial success, things began to slowly unravel.

As the 1970’s drew to a close, Tyler’s substance abuse was drawing him to rock bottom. Aerosmith’s success waned, and Tyler’s total dependence on substances ruined his professional and personal life. In 1983, he went to his first rehab. The singer estimates that he attempted rehab multiple times before finally getting sober in 1988.

Not only did Tyler get sober, his bandmates in Aerosmith also got sober. Due to their newfound recovery and commitment to their music, the band was able to resuscitate their career. In fact, Aerosmith was bigger than ever.

Tyler was able to stay clean and sober for a dozen years, but relapsed in 2000 after becoming dependent on painkillers after foot surgery. After three years of dependence, he checked himself into Betty Ford Clinic. While there have been obstacles, Tyler found focus and commitment to recovery and is now 9 years clean and sober.

The Price of Relapse

Steven Tyler’s road to recovery has been difficult. While he has experienced significant periods of sobriety, he has also relapsed numerous times. With his history of relapse, Tyler is well aware of the price he would pay if he were to lose his sobriety. In GQ, he statedthe following:

“I got a band that’s still together, the guys are still alive, everyone’s healthy. We play better than we did 50 years ago…I mean, there was a certain rawness when we played clubs and we were all fucked up. Sure, I get it. But that band is still together and still sought-after. People still want us for a million-plus dollars a night. And that’s what’s at risk if I use again. And my kids. My dogs. My beautiful f******g house in Maui. My girlfriend. Everything is at risk.”

Despite the best efforts, relapse is an unfortunate reality in recovery. If you are in recovery and are looking for ways to strengthen your sobriety call Drug Rehab Program Journal today at 1-800-205-1201. Help is just one phone call away.